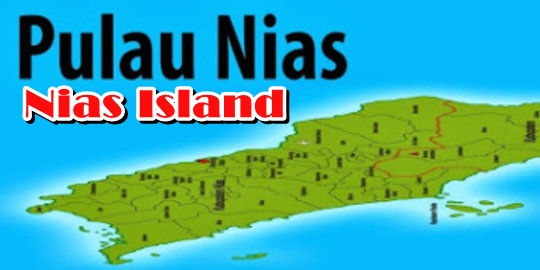 Yaahowu!!! Hello guys, this time I want to share some of the tours on the island of Nias. Beach tourism that soothes the heart and mind because of the beauty of the beach. There you can feel the beauty of the beach and some unique cultural pieces for you to enjoy. Here I want to share the famous beach in the eyes of the world which is a surfing tourist destination for overseas visitors. If you are interested, let's see and read this article ... Yaahowu!


Indonesia has indeed been very well known for the beauty of its marine tourism, one of which is beautiful beaches on Nias Island. Not only domestic tourists, both local residents and visitors outside Nias island, the charm of Nias island is also able to attract foreign tourists to go to the island, which is commonly known as the stone jumping tradition (Fahombo) . Don't worry about access to Nias Island. For tourists who live outside Tanö Nihaterm (thefor Nias island in the Nias language), you can visit this island through two routes.
The tourists are guaranteed not to lose spending the holidays to the island located in the province of North Sumatra. Various tourist destinations have prepared to spoil the eyes, such as a row of beautiful beaches that have even been known to foreign countries. Well, here are beach tourism destinations throughout Nias island that you must visit. 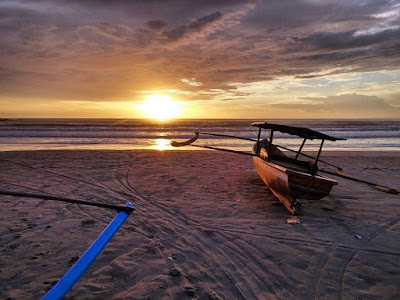 The beach which is located in Sirombu Subdistrict, West Nias Regency is directly adjacent to the Indian Ocean, which is one of the core points of why this beach is said to be iconic. It will not be erased in the memory of Ono Niha (the Nias language language which means Nias people), that Sirombu Beach was a silent witness of the 2004 Tsunami tragedy and the 2005 earthquake that devastated the region. In fact, the remnants of the debris that had been covered with weeds scattered on several corners of the beach, seemed to show how natural disasters had swept the traces of Sirombu's waves before the waves rolled into this area. In addition, the Ikan Bakar Hutagalung cottage is one of the iconic Sirombu beaches. Wooden huts located right on the beach make this dish so appetizing. The price is friendly in the pocket, enough to spend Rp. 70,000, - visitors can enjoy grilled fish with a total weight of 1 kg. Not only that, the fish that will be ordered can be chosen according to taste provided the amount is not more than 1 kg. Then, just wait a while at the log cabin, or take a leisurely stroll on the edge of the beach while waiting for the fish to be processed and delivered to the cottage. Taste? Hmmm, ami sibai! * Nias language: very good.
2.      Sorake Beach

This beach is unique because of the rocks that stretch along the shoreline. The beach which is located in Teluk Dalam District, South Nias Regency, is also famous for its large and high waves. This is what makes Sorake Beach the right choice for surfing. So that many foreign surfers who come to the beach to join the surfing competition or Nias Open every year. Naturally, Sorake Beach has even been named the 10 best beaches in the world for surfing! So, don't wait anymore, visit the beach!
3.      Lagundri Beach 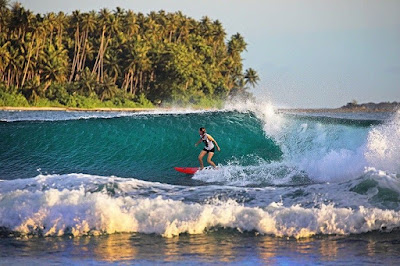 For surfers world-class, the existence of Lagundri beach must be familiar. The beach which is located not far from Sorake Beach is a favorite forlovers surf. Similar to Sorake Beach, Lagundri Beach is also among the 10 best beaches in the world to surf with waves that can reach eight to ten meters (around 5 levels), with lengths of up to several kilometers. For those of you who want to enjoy the beautiful panorama of the beach while doing surfing activities, you should visit around June or July because the weather and the beach waves are good.
4.      Gawu Soyo Beach 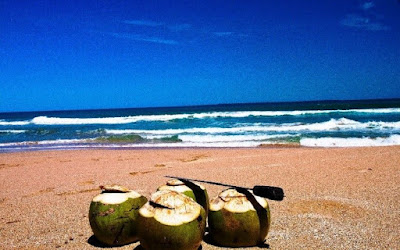 Gawu Soyo Beach, which is colored reddish sand (as the name suggests), is located in the district. Afulu, Kab. North Nias. From a distance, the reddish sand at a glance looks like reddish clay due to the very thick red sand. However, if it is touched, it is certainly not clay, because there are so fine grains of sand. So that when the foot steps along the beach, the grains of sand appear to stick to the visitor's body. In addition, the existence of rare turtle species in Indonesia which sometimes comes out of its habitat and crosses the coast is also a main attraction for tourists visiting there.
5.      Beach on Asu Island 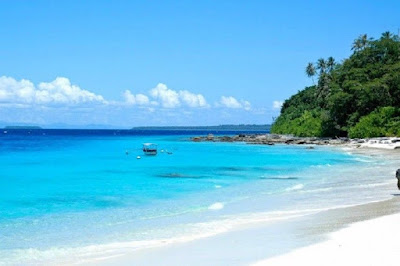 Asu Island is very popular among foreign tourists and even dubbed 'Paradise on the Earth'. Asu Island is one of the islands in the Hinako Islands which is located in the administrative district. West Nias. On this white sand island, visitors can do snoorkeling and diving to see the beauty of the underwater island of Asu. Various types of coral, coral, and colorful ornamental fish combine into a charming treat. Not only are the waves rolling high for surfing, the view of the sun in six here is also very fascinating.
6.      Tureloto Beach 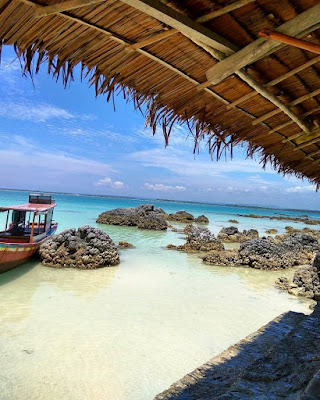 One of the features of the beach which is located in the district Lahewa, Kab. North Nias is an exotic reef (also known as a brain stone because it resembles a brain at a glance) that was previously underwater to be on the coastal land due to the 'ebb' of sea water that occurred since the earthquake that occurred on Nias Island in March 2005 ago.

In addition, tourists can also feel the sensation of floating even without a float like the Dead Sea! This is caused by the high salt content in this seawater. Naturally, if Tureloto Beach is dubbed the Dead Sea of ​​Indonesia. However, even though the salt content is very high, it turns out that this beach still saves the lives of the rich marine life in it.
7.      Hoya Beach 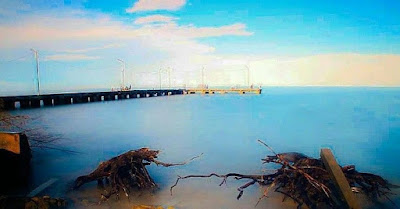 Along Hoya Beach in Kec. Gunungsitoli Utara, Gunungsitoli City is lined with hundreds of pine trees. This tourist destination is also equipped with cottage or warung facilities that serve a variety of seafood (seafood) that are tempting to further pamper the tourists who visit.
8.      Beach on Tello Island 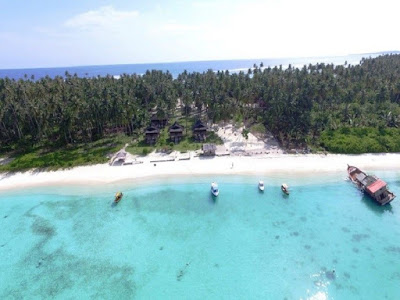 Tello Island is the capital of the District of Pulau Batu in Kab. South Nias. Large waves are the main attraction for tourists visiting the island for surfing. Coupled with beautiful natural charm and conditions that are not too crowded. This soft sandy beach also has a wealth of natural underwater which is effective in pampering the eyes. Moreover, the view of the sunrise and sunset on this island is very exotic.
9.      Beach Ladeha 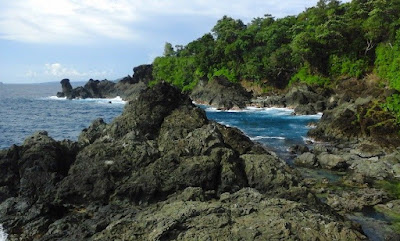 Most famous Ladeha from the beach which is in Kec. Amandraya, Kab. This South Nias is the existence of natural ponds made of coral. This pool is said to have been created when Nias Island was hit by an earthquake in 2005 that caused a change in physical form on this beautiful beach. In addition, tourists are also fascinated by the atmosphere of the sunset.
10.  Beach Pasir Berbisik 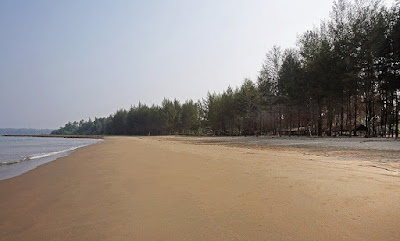 Beach Pasir Berbisik is located in Kec. Sawo, North Nias District. According to legend, the beach is named 'whispering sand beach' because it sounds 'tones' from the sand when visitors step on it. Another uniqueness is that this beach is not limited by coconut trees as it usually grows on other beaches, but pine trees which are deliberately planted to shade the beach.
11.  Beach Pulau Panjang 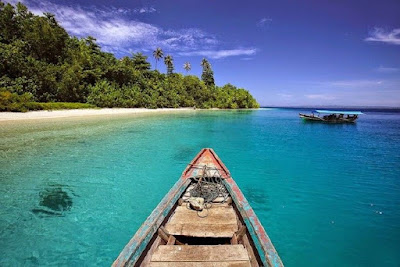 Beach Pulau Panjang located in Kab. North Nias is indeed not as famous as Asu Island or Tello Island, but the exoticism of the beach on this island is no less fascinating than other beaches on the island of Nias. This beach not only has soft sand, but also the many unique corals that lie along the shoreline.

So those are some exotic beach resorts on Nias Island, if you are a beach lover, surfing is not wrong if you try to visit the beaches on the island of Nias ... Yaahowu !!!